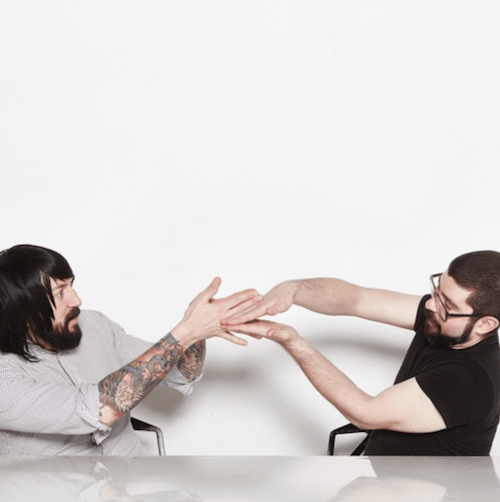 So MSTRKRFT are back with their first new material since 2011 ‘Beards Again‘, which in all honesty we completely missed first time round and having just listened to it, glad we did with its lackluster guitar slashing and generic electro beats. Which means its actually been almost 7 years since their last meaningful contribution, their 2009 LP ‘Fist of God’. So what to expect from a revitalised MSTRKRFT?

For those who dont know their history MSTRKRFT have been with us since their 2006 debut ‘The Looks’ and like many breaking artists of that time they got caught up in the swirling electro maelstrom that threatened to swallow anything that even hinted at combining a guitar with a synthesiser. For two maybe three years electro swept aside all that got in its path, with Justice, Soul Wax, Simian Mobile Disco, Boys Noize and Erol Alkan all clearing the path for acts, like MSTRKRFT, to flourish. Unfortunately like any all conquering force of nature the initial power quickly dissipates as its rapid expansion begins to loose momentum, and by 2009, like the receding waters of a Tsunami wave, the majority of the electro fraternity found themselves floundering with long overdue second albums that had somewhat missed the boat. Momentum was lost and electro was stranded with no where to go…

Interestingly if you consider 2009 as the pivotal year for electro you’ll notice that all the key artists in that scene were too slow in getting their second albums released, which perhaps partly explains why momentum was lost and the scene fizzled out.

So where does this leave MSTRKRFT in 2016. Have they bought themselves a nice wooden lined Berlin based studio and gone all low lighting Nils Frahm on us? Or, like their 2009 record, have they revisited what in hindsight was unwittingly predicting the future of British Pop; Bounce could have been LMFAO, Heartbreaker is without doubt Calvin Harris. Well the answer is neither, with ‘Little Red Hen’ suggesting a re-visiting of former glories with a contemporary update. Little Red Hen is noisy, abrasive and something that is equally at home in 2007 as it is in 2016…