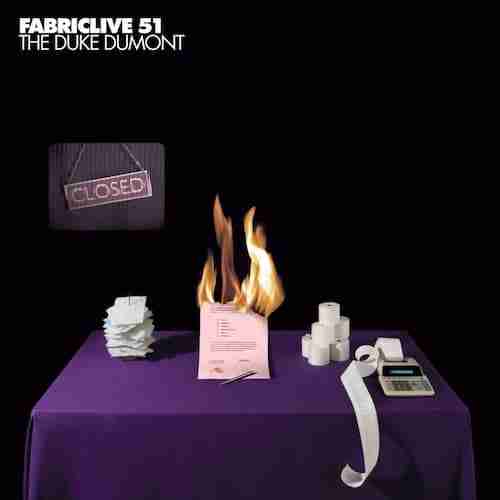 Hi, I’m Matt Allfrey. I am, amongst other things, a DJ as half of Battery Powered and a writer for The Recommender and Brighton Calling. Blah Blah Blah have invited me on board to write some words about the Fabriclive mixes. First up is Fabriclive 51 mixed by The Duke Dumont.

Duke Dumont has always been an interesting character in dance music. He was pretty much unheard of until winning the Diesel U Music contest in 2006 and then found himself immediately rubbing shoulders with the likes of Chromeo, Boys Noize and Popof when Tiga signed him to Turbo Recordings. His mix is rather interesting as well, it’s only thirteen tracks long, not that the overall length is affected by this with Dumont choosing to play out his selections in full.

It’s an hour and seventeen minutes of sparse, percussively driven rhythms under laid with low rolling bass lines and superimposed with trippy vocal samples. Dumont’s picks afford the maximum amount of space to each element, the low end patterns barely change over a five minute period but the subtle variation in cymbal arrangements and the drawling lyrics keep the mix moving along with the kind of simplicity and progression that harks back to 90s techno. There aren’t any build ups, break downs or white noise sweeps that are synonymous with today’s dance music, themes drop out and return with little or no announcement. In fact a lot of the production staples of the modern day artist are deliberately shied away from leaving nothing that really catches the ear or focuses the mind. It’s not until Gerd & The House Vectors’ ‘We Bring U Muzik’ (track seven) that the melody is played out by more than a bass line and pitched drums, in this case adding a bleeping synth for the tweeters to get stuck into. It then mixes neatly into four minutes of Green Velvet’s aural assault, ‘They Came From Outer Space’ which builds incessantly almost to the point of intolerability, making the arrival of the man-at-the-wheel’s remix of ‘Bathroom Gurgle’ by Late Of The Pier all the sweeter. Dumont rounds the mix out with a suitably drugged up two-step track by Floating Points and some deep, brooding, atmospheric electronica from Idioma.

This is a mix that you could hear at Fabric at five in the morning and sway around to, allowing your brain to swim in the space and reverb. Unfortunately, not everyone lives in London. Those unlucky souls with a less than capital location will more likely find it on their CD player after a heavy night out, when the feet still want to tap but the body has long lost the desire to sway and the ability to stand upright.