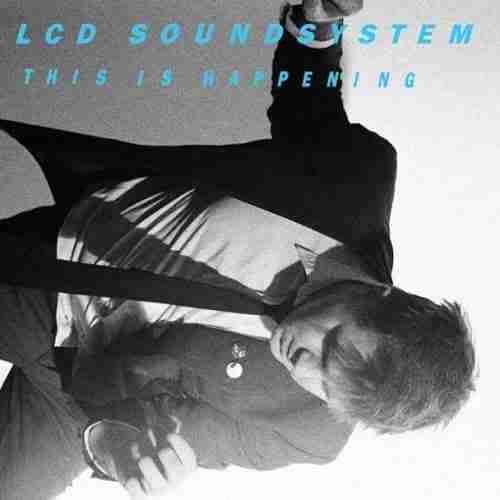 LCD Soundsystem are back with a new album. ‘This Is Happening’ has some big shoes to step into as it follows 2007’s critically acclaimed ‘Sound Of Silver’. Thankfully James Murphy and co are already garnering some very positive reviews and they’re about to get another one.

LCD Soundsystem work like magicians, taking generally accepted norms of songwriting, sawing them in half and joining them back together the wrong way around. Where most albums would come out swinging, the first track on ‘This Is Happening’ is initially a hushed ballad with skittering claps and the tiniest hint of synth. It eventually kicks in with a much more driving melody and James Murphy’s animated vocals yelling and sighing until he’s completely out of breath. For any other act it would be their last track, clocking in at an album closing nine minutes, but that wouldn’t be extraordinary enough for these entertainers.

All over this album LCD have subverted expectations and created something that shouldn’t really work. Under close inspection the album lacks any real flow with energetic tracks like ‘Drunk Girls’ sitting awkwardly between the much subtler ‘Dance Yrself Clean’ and ‘One Touch’ both of which are propelled lazily along by ticking percussion, warbling synths and laconic, Nancy Whang backed chants. The songs, like a magician’s three solid rings, initially look like they can’t be joined together. LCD clumsily bang them against each other with fade outs and drum kits falling down stair wells until they form a chain. However, none of this is apparent, the content is so fulfilling and distracting that the segues happen in the background and Murphy’s sleight of hand coerces your ears into ignoring them.

Album highlights are ‘All I Want’ and ‘I Can Change’. The former, a heartfelt track with sliding, wailing guitars, malfunctioning arpeggiators and more than a nod to David Bowie’s ‘Heroes’. The latter, a sing your heart out dance number that makes you choke back a few tears in the same way that ‘All My Friends’ had us simultaneously shuffling and streaming.

LCD Soundsystem have pulled a huge, gleaming white rabbit out of a battered old top hat right in front of our eyes. Proving that less is more, the simplicity of the instrumentation and James Murphy’s colloquial spoken word leave plenty of room for ‘This Is Happening’ to be saturated with emotion rather than unnecessary noise. It’s dance music with feeling or it’s feeling with dance music. Either way it’s the kind of magic that survives close scrutiny and when Murphy rolls up his sleeves the only thing he exposes is his heart.