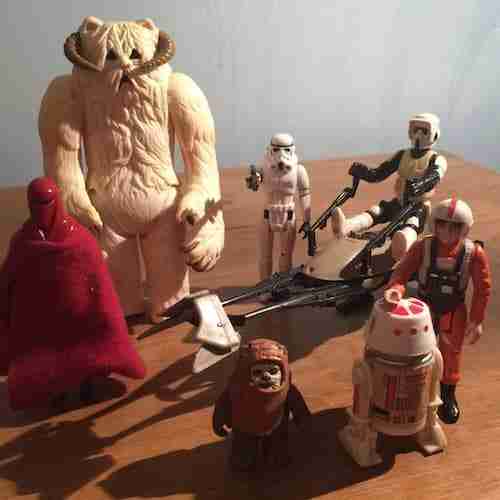 With Christmas fast approaching and the final installment of the Marathon Des Sables registration fee imminent it was time to cash in my Insurance policy. An insurance policy I had taken out in the mid 80’s and that had since survived numerous attempts at a premature withdrawal or car boot sale. The time had come, ironically like Luke Skywalker in the Tatooine Desert, to leave my past behind me. And with that my entire collection of vintage Star Wars collectables were placed on eBay…

It was quite a collection I had, it included an X-Wing, B-Wing, Tie Fighter, Scout Walker, ATAT, Millennium Falcon, not to mention over a hundred figures and other highly sought after items. My sale proved to be expertly timed with the combination of Christmas and the hotly anticipated ‘The Force Awakens’ only weeks away from release making my eBay account more attractive than Princess Leia in her gold bikini. Unfortunately I didnt have original boxes and none of my items were in unused mint condition which meant 100’s not 1000’s of pounds, but even still I cleaned up, with my most startling sale being £25 for a 2cm x 5cm piece of perspex, aka an X Wing cockpit canopy, madness!

Ebay was my new best friend, nothing was safe, you got to close and Id sell you faster than you could say “utini” to a passing Jawa. By the time the deadline for my final instalment arrived, Dec 14th, I was able to pay the majority of the balance without the use of my already heavily burdened credit card. Things were looking up. I still didnt have a job, but my money was under control and to lift my spirits further I was informed by my GP that I had an easily curable condition, vitamin D deficiency, or as I like to put it a severe Australia deficiency. As it turns out the lack of Vitamin D in my system was the main reason I was exhausted all the time and unable to train, furthermore low Vitamin D levels can play a significant role in accentuating the symptoms of depression, and therefore this diagnosis was a momentous discovery.

The waiting was finally over and with a slightly heavier post Christmas disposition it was time to discover if my creaking joints could reach the recommended target of running a 100 miles per week. The only thing was I’d lost 2 months from my originally planned 5 month training plan…[Part 4 – Run Forrest Run: to follow soon]