Do we need Vinyl? Amazon announce growth in total sales….. Amazon UK have just announced a 100% increase in Vinyl LP sales from 2012, furthermore the ‘Entertainment Retailers Association’ confirmed earlier this year that sales of vinyl have increased to a value of £5.7m from a previous £3.4m  in 2011, for those without a calculator or Carol Vorderman in close attendance thats a 40% increase, and if that wasnt uplifting enough for the vinyl purists among you, Fact Mag reported earlier this year that Indie Vinyl sales have seen a 45% jump in the first two quarters of 2013. So all in all the Vinyl market is still showing some dogged signs of life, however is this a sustainable trend or just the final death throws in a market that is systematically eradicating the need or desire for physical media? Take HMV’s recent closure of 103 stores, the absence of your once beloved independent, DJs with USB sticks and Panasonic announcing in late 2010 that they have ceased production of the fabled ‘Technics 1210’, sighting decreased demand due to the proliferation of Digital technology. 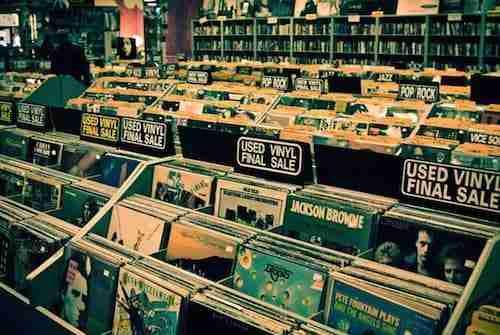 Vinyl has certainly seen a revival in recent years, with varied sources agreeing that since 2007, and the introduction of the global ‘Record Store Day’ in 2008 that in general the public desire for vinyl has consistently grown. Since 2007 Global Vinyl Sales have risen to $171m from $53m (source IFPI), and in the UK LP sales have grown from £1.1m (2008) to £5.7m (2012). However these figures do need to be considered in context of the total market, with various sources suggesting that vinyl accounts for only 2% of the total market, with Digital media’s market share growing year on year, the IFPI reported that Digital content (MP3’s & Streaming Services) took a further 9% of the total global revenue market in 2012. Furthermore many believe the boost in Vinyl sales is also directly proportional to the decline in other forms of Physical media, ie CD’s, when was the last time you bought a CD single?

The general consensus, having read a number of related articles, is that Vinyl is very much the product of a niche market, especially when you consider that Apple sold 74.7m iphones in the second half of 2012 (source Forbes), not to mention iPads, iPods, Androids etc and total turntable sales barely hit a million at a static 110,000 units. Furthermore when you look at the Top 10 selling Vinyl LP’s on Amazon its not a stretch to deduce that continued sales of vinyl is largely a generational thing, cant imagine many 16-18 years olds snapping up the latest Bowie record, or Pink Floyds – Dark Side of the Moon (30th Anniversary Edition). Why 16-18, because they are the future of music consumption and lets be honest we’ve all sat on a mode of public transport listening to their tunes pumping from the latest mobile device.

So do we need vinyl? Hand on heart we would of course say yes, we still buy vinyl now, and Blah Blah Blah Records is both Vinyl and Digital. However BBB operates in a relatively niche market and therefore we have to be realistic when looking at the trends in global music consumption. Objectively it is only a matter of time before physical media becomes obsolete in our increasingly fast paced impatient global society!

………having said that people have attempted to predict the end of vinyl almost as often, and equally as unsuccessfully as the end of the world!!