How is it possible that a company with a reported 25 million subscribers, close to 100 million users and an annual turnover (2015) of $2.12 billion still be reporting ever increasing losses year, after year, after year? Yet despite a reported total debt, including loans, of $1.56 billion (Source: Digital News), in 2015 Spotify reported that revenue was up 80% and the total number of subscribers had more than doubled to 25 million from the reported 10 million in 2014.

What is going on? If streaming is the future and Spotify is leading the charge, surely this evidence suggests, like an Investment Bank propped up on worthless sub-prime mortgage bonds, that the whole thing will eventually collapse like a House made of cards. Yet despite 8 years of accumulative debt it has not, why? 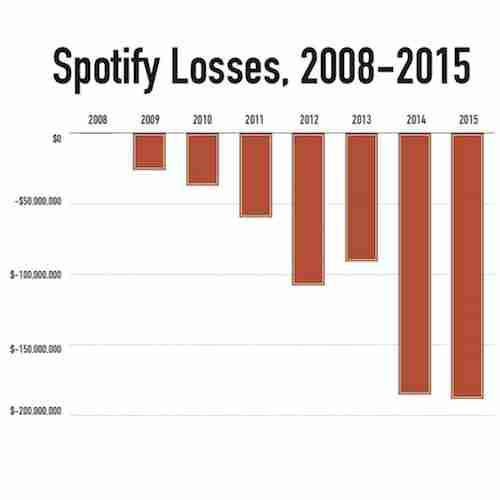 Well here’s our theory, now bear with us, it will all make sense. The sub-prime crisis of 2008 which effectively bought the world economy to its knees didn’t happen over night, why, and lets be honest we dont really understand all the details, but basically it was making a lot of money, for a lot people, for a lot of years. As the revenues and profits were pouring in, more and more people wanted a slice of the pie, a bit like when a new social media app appears, at first only a few know about it, however as its popularity grows even your mum gets in on the action. As a result more and more of these deals were being made with an ever increasing disregard for the viability of the investment’s risk. No one asked questions so long as their investment was maturing nicely, and it wasnt like the banks didnt know that the investments were worthless, they just didnt mention it… it paid not to. Steve Carrell’s character ‘Mark Baum’ summed up the situation with the following statement in 2015’s ‘The Big Short’.

“We live in an era of fraud in America. Not just in banking, but in government, education, religion, food, even baseball… What bothers me isn’t that fraud is not nice. Or that fraud is mean. For fifteen thousand years, fraud and short sighted thinking have never, ever worked. Not once. Eventually you get caught, things go south. When the hell did we forget all that? I thought we were better than this, I really did”.

Now we’re not suggesting that there is systemic fraud within the music industry, however when you consider that 85% of Spotify’s revenue, $1.82 billion, is paid to rights holders or labels, of which, according to ‘Music Business Worldwide‘, major labels keep 73%, there is an obviously worrying similarity to the sub-prime example above. Spotify making huge losses, labels making huge profits, streaming now the number one source of retail music revenue (Source: 2015 RIAA Report) and growing year on year. Is it conceivably possible that the only reason Spotify is still with us, despite 8 years of accumulative losses, is because it pays for the major’s to make it so, especially when you consider the bargaining power the majors have with a company like Spotify as apposed to a company like Apple? Yet if this is the case why are they annually upping their licensing fee’s? (Source: Digital Music News May 24th 2016).

Streaming is the future, everyone knows that, and Spotify are presently leading the charge. However Spotify’s current business model, despite revenues of $2.21 billion would appear, on the face of it, flawed. The Major’s must know this, but are they, like the bankers before them in 2008, simply choosing to ignore the alarm bells as it’s presently profitable to do so? If so, as Steve Carrell’s character Mark Baum suggests, this is just another example of short sighted business thinking that can only have one inevitable outcome?…