At times creativity is so confusing and exhausting that even the thought of making a cup of tea feels like embarking on some impossible voyage of discovery…milk in first or milk in last, tea bag or tea leaves. The mind gets so bewildered it feels as though someone has reached into our heads, scooped out all the useful stuff and then rewired whats left, the net result being a laborious struggle to find any sort of clarity. Spontaneity is urm…hang on, not to mention an imagination that is duller than, well, a really dull thing. No matter how hard we try the words, notes or brush strokes will simply not come, and like being caught in the clutches of a boa constrictor, the more we struggle the tighter the malaise will grip us. In fact there is only one solution, STOP. But we don’t, instead we toil to the point of doubting ourselves, only two days ago we were pleased with what we had created, but now it’s no better than a 2 years old attempt at colouring between the lines, everything has become tainted by today’s failures, we’re ready to give up, thrown in the towel, take the eight count and then suddenly there’s a flicker, the nucleus of an idea flirting on the fringes of our imagination, we can’t quite grasp it but the accelerant that all creatives need has once again been found, INSPIRATION. 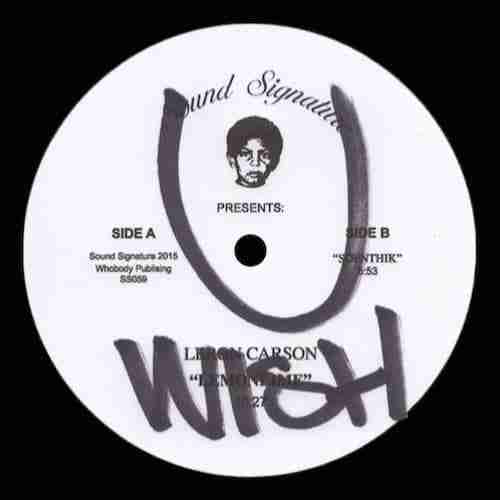 Today’s inspiration, in what has been an exhausting week of man flu, new employment and an uncertain future, came in the shape of Mark Pritchard’s recently curated Bleep Chart, featuring the previously undiscovered, by us at least, Leron Carson – Lemonlime / Sofnthik, record. Like all great finds its had little press, no stop motion music videos or sex tapes to spice up it’s arrival, it’s simply slipped into the record shops and has patiently waited to be discovered. John Digweed was recently quoted as saying “If you’re the biggest DJ in the world, you’re in a position where you can play stuff that people dont know and blow their minds…” Well we believe Leron Carson ‘Sofnthik’ is such a record and we’d even go a step further than Diggers and suggest that his wise words are applicable to DJ’s of all shapes and sizes. There are undiscovered weapons in all genres of music so as Digweed concludes, dont just “…play stuff they know to get a reaction, that’s just being lazy”.