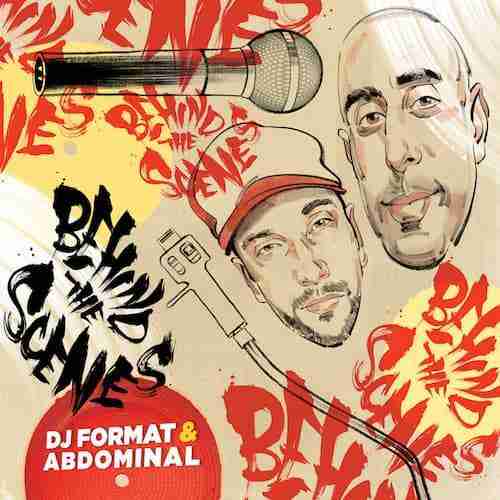 Need some Hip-Hop in your life that isn’t all about hoes, blow, bling and ka-ching? We certainly do. DJ Format & Abdominal – Behind the Scenes is just that record…

As much as we admire and respect Hip-Hop, far to much of it is still trading on an ideology that can feel clichéd and to be brutally honest, at times, unnecessarily crass. We maybe middle class white boys, however we do have a basic appreciation of why money etc became such a focal point for the Hip-Hop generation. We read the book ‘Can’t Stop Won’t Stop‘ and more recently watched the documentary ‘Hip Hop World News‘, narrated by British rapper Rodney P. Both of which start their stories in 1970’s Bronx, New York. An area that rose up, via the medium of Hip-Hop, in an attempt to free itself from poverty and crippling white oppression.

Naturally like the rest of the world having, money, and it’s various trappings, ultimately became a key indicator of freedom. Unfortunately fast-forward to 2017 and you’d be forgiven in thinking that money, thug life, cribs, cars, girls, sex, drugs, guns etc is all Hip-Hop cares about. Fundamentally this is not true, it’s just an easier sell than not having a mortgage or sending emails…

Thanks to BBC 6 Music for the heads up