Toddla T is having a run of bad luck around the release of his second album ‘Watch Me Dance’. First, an advance copy of the album was leaked by an irresponsible journalist who Ninja Tune quite rightly named and shamed. As a result, the album had to be rush-released digitally to try and mop up some online sales whilst the physical release was pushed forward. Then, all his CDs were lost in the fire in the PIAS warehouse meaning that the release had to be pushed back another week. Here’s hoping that the next few paragraphs will convince you to go out and support an unlucky artist, label and industry in these challenging times. 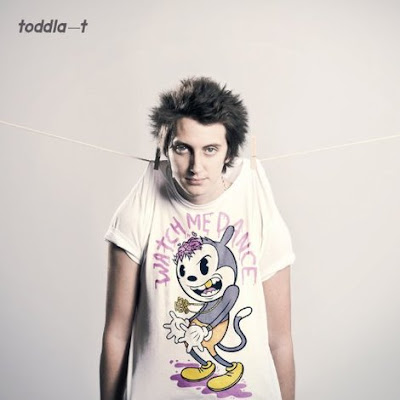 ‘Watch Me Dance’ shows a heck of a lot of progression for Toddla from his first outing ‘Skanky Skanky’. The productions are denser and more complex, the instrumentation is hugely varied and features guitars and pianos as well as the whomping bass heavy synths of his debut. The humour has been toned down (although not altogether dispensed with) in favour of a more mature songwriting style. Title track ‘Watch Me Dance’ featuring Roots Manuva has a distinct tongue-in-cheek feel to it (especially if you watch the video) but is seriously radio friendly at the same time. Elsewhere Mr V and Serocee’s involvement have been dialed down to make way for more female vocalists including Roisin Murphy and Ms Dynamite. The women on this album make it shine, ‘Take It Back’s rave piano and drums work delightfully under Shola Ama‘s vocal to give it a 90’s feel. The, often brief, interspersed MC verses are far less overwhelming than on ‘Skanky Skanky’ and Mr V’s between song banter has totally gone.

There’s a real variety of genres on Toddla’s follow up. The aforementioned tracks incorporate rave and electro but there’s also R’n’B, Soul, Funk, Reggae and Dancehall all unified by large amounts of bass. Particularly surprising is the straight up soul/funk intro to ‘Do It Your Way’ which breaks into a jungle tear-out so abruptly yet competently that it might as well be a remix of a vintage track. Final song, ‘Fly’, is a totally genuine Reggae number with very little electronic production. Notably he’s avoided Dubstep altogether and at a point when the genre is reaching saturation point this has got to be a good idea. He’s opted instead for a collection of songs that, despite their disparity, come together for a very cohesive second album.