On paper Gold Panda‘s debut has a lot going for it. A number of respected sources are touting it as album of the year, James Shaw of Simian Mobile Disco has manned the controls and it’s receiving a plethora of comparisons to Four Tet and Caribou. We thought, therefore, that it was about time to check it out for ourselves. 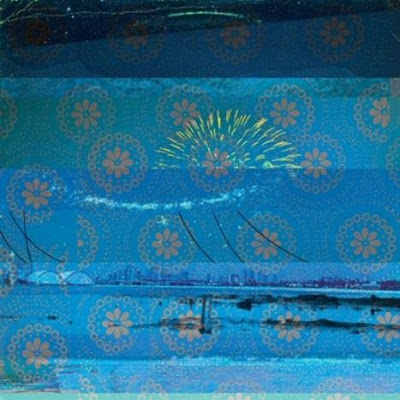 ‘Lucky Shiner’ is a patient album. It is the result of a patient life. Taking in influences from a two year period spent studying Japanese culture, language and history at the School of Oriental and Asian studies in Japan. It’s loaded with family history, relationships and memories – inspired by everything from ‘Marriage’ to a field recording of Gold Panda helping his Grandma to push a wheelbarrow in the garden. It was even made in a patient environment, a two week house-sit over Christmas for his uncle and aunt in the idyllic English countryside. In relaxed sessions between walking their dog Daisy. It, therefore, requires a little patience in return and on repeat plays the listener can descend into its layers to reveal something truly worth the wait.

‘Lucky Shiner’s eleven tracks convince your subconscious to gradually perceive their masked features and subtle cohesion. Like a string of dreams disturbed occasionally by the fluttering of a sample or a restless beat. They wrap you in a blanket of reverb, vinyl crackle and distant chimes and pass by with little concept of time or cause leaving only the vaguest notion of recollection. Here, a snatched memory of a loved one. There, a vision of an eastern city you once visited or saw on TV or imagined. All just as likely to arrive in your consciousness without you travelling anywhere. Awareness of detail and concept increases as you become more comfortable with Gold Panda’s surroundings but remain blurred around the edges. Attempting to inspect an individual phrase too carefully will cause it to shift imperceptibly under your attention, maintaining a comforting lack of distinction. You may notice that an acoustic ballad is missing its lyrics but actually it’s just waiting for you to add your own narrative. The atonal twang of eastern instruments sat on western harmonies might register as odd. But delve into the paper lantern style cover art of fireworks over an aqueous city-scape or the evocative song names (‘Same Dream China’ / ‘India Lately’) and a hazy understanding returns. Some might pen this album as ‘genre-spanning’ but it’s more genre-irrelevant, traversing between, electronica, techno and balladry under no pretense. If it sits within a certain genre for more than three and a half minutes you’d be none the wiser as ‘Lucky Shiner’ dispenses with formal song structures, lyrics and specific production techniques. It’s a pale canvas awash with emotion and feeling yet leaves enough space for you to superimpose your own meaning.

Gold Panda has created a debut by travelling – both through time and across the world – so that you don’t have to. The result is music that doesn’t transport you somewhere else but makes you feel totally comfortable right where you are.

Gold Panda – Lucky Shiner is out now from all major retailers including Ape Music.